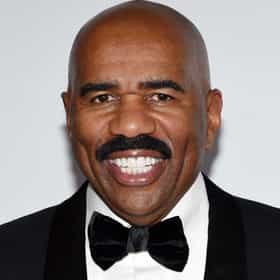 Broderick Stephen Harvey (born January 17, 1957) is an American comedian, television host, producer, radio personality, actor, and author. He hosts The Steve Harvey Morning Show, the Steve talk show, Family Feud, Celebrity Family Feud, Little Big Shots and its spinoff Little Big Shots: Forever Young, Steve Harvey's Funderdome, Showtime at the Apollo, and since 2015, the Miss Universe pageant. Harvey is the author of Act Like a Lady, Think Like a Man, which was published in March 2009, and the book Straight Talk, No Chaser: How to Find and Keep a Man. He starred in The Steve Harvey Show and was featured in The Original Kings of Comedy. He is a six-time Daytime Emmy Award winner, ... more on Wikipedia

Steve Harvey is ranked on...

#871 of 1,041 Celebrity Death Pool 2020 102.3k VOTES They may be beloved performers, award winners, or game changers, but no matter how famous, you can’t escape death. This cele...
#166 of 362 People who voted for Steve Harvey... also upvote Home Alone Franchise on The Absolute Most Hilarious Movies Ever Made also upvote Toy Story Franchise on The Absolute Most Hilarious Movies Ever Made The Funniest People of All Time 893.2k VOTES The funniest people of all time are a mix of actors, comedians, and even a few people who probably didn't start off trying t...
#16 of 266 Celebrities Who Should Run for President 621.4k VOTES Which celebrity would you actually vote for if they ran for President of the United States? If you can remember all the way ...
#348 of 524 Annoying Celebrities Who Should Just Go Away Already 1.2M VOTES The most annoying celebrities, ranked by entertainment fans themselves. These annoying celebs are obnoxious, overexposed, ...
#56 of 60 Celebrities Who Would Help You Out In A Pinch 11.9k VOTES Though celebrities possess millions of dollars, luxurious homes, and a team of assistants, there are some celebs (...
#175 of 862 People who voted for Steve Harvey... People in the Northeast are 3x more likely to vote for this Celebrity Death Pool 2016 370.1k VOTES Celebrity death pool 2016: Here's a large list of celebrities we think just might die this year. The only certainties in l...
#7 of 23 The Best Black Male Talk Show Hosts In TV History 229 VOTES Talk show hosts help audiences dissect the issues of the day while often adding humor into the conversation. The best black ...
#13 of 52 The Game Show Hosts With The Most 6.2k VOTES If you're a fan of quiz shows like Jeopardy, then you probably already know how important a great game show hosts are to the...
#7 of 57 The Best Male Talk Show Hosts in TV History 1.6k VOTES Most of the best male talk show hosts are on late night talk shows. From Conan O'Brien and David Letterman to James Corden a...
#40 of 104 New American Idol Judge Picks 25.3k VOTES Who should the new 'American Idol' judge picks be? With word that 'AI' judges Steven Tyler and Jennifer Lopez are calling it...
#2 of 23 The Best Celebrity Game Show Hosts of All Time 3.3k VOTES There are a lot of celebrity TV game show hosts, and it totally makes sense why: it’s great for marketing, people who like t...
#16 of 31 The Best Celebrity Surprises From The Ellen Show 647 VOTES This is a list of the best celebrity surprises from The Ellen DeGeneres Show. As the queen of daytime talk, Ellen DeGen...
#36 of 43 Celebrity Men Over 60 You Wouldn't Mind Your Mom Dating 4.5k VOTES Age is nothing but a number, right? While everyone loves a good six pack, there's something about the dignified looks of nic...
275+ Celebrities with Twin Children 399.6k VIEWS List of celebrities who have twin children, along with the names of the kids, their years of birth, and their other parent...
Famous People Named Steve 11.8k VIEWS List of famous people named Steve, along with photos. How many celebrities named Steven can you think of? The famous Steves ...
53 Celebrities Who Have Been Homeless 673.6k VIEWS   List of famous people who were homeless, loosely ranked by fame and popularity. A surprising number of famous actor...
The Most Notable Stand-Up Comics from Def Comedy Jam 446.3k VIEWS A thorough list of Def Comedy Jam performing comedians, with photos! Russell Simmons classic HBO stand-up comedy showcase ra...
What Bald Celebrities Would Look Like If They Had A Full Head Of Hair 6.3k VIEWS What do babies, elderly folks, and the Rock have in common? They don't have hair. We're used to seeing certain celebrities w...
Celebrities Who Turned 60 in 2017 50.6k VIEWS Many celebrities are celebrating their 60th birthdays in 2017, but don't call them senior citizens just yet. These Hollywood...

Steve Harvey is also found on...