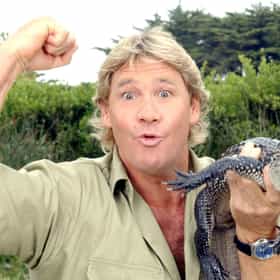 Stephen Robert Irwin (22 February 1962 – 4 September 2006), nicknamed "The Crocodile Hunter", was an Australian zookeeper, conservationist and television personality. Irwin achieved worldwide fame from the television series The Crocodile Hunter (1996–2007), an internationally broadcast wildlife documentary series which he co-hosted with his wife Terri; the couple also hosted the series Croc Files (1999–2001), The Crocodile Hunter Diaries (2002–2006), and New Breed Vets (2005). They also owned and operated Australia Zoo, founded by Irwin's parents in Beerwah, about 80 kilometres (50 mi) north of the Queensland state capital city of Brisbane. Irwin died at 44, after being ... more on Wikipedia

Wholesome Steve Irwin Memes That Prove He Was Too Good For This World 1k votes On September 4, 2006, the world lost Steve Irwin, AKA the Crocodile Hunter. The Australian TV host and conservationist won o...

Steve Irwin is ranked on...

#10 of 931 People We Wish Were Still Alive 3.2M VOTES RIP to our world's greatest achievers, those who changed the way we live and the ways we thought. This list of people we wis...
#57 of 474 Famous Role Models We'd Like to Meet In Person 531k VOTES These are the famous folks it would be most exciting to meet in person, as ranked by the wisdom of the crowd. Some of the be...
Bizarre Deaths Of The 21st Century 326.5k VIEWS Ready to be creeped out? Here are some very strange deaths that have occurred during the 21st century. The following list in...
Surviving Tragedy: Resilient Children of Dead Celebrities 4.2M VIEWS It's sad enough when a celebrity leaves us before his or her time, but it's heartbreaking when they also leave behind childr...
Famous People Named Steve 10.6k VIEWS List of famous people named Steve, along with photos. How many celebrities named Steven can you think of? The famous Steves ...
Famous People Named Steve & Steven 55.5k VIEWS List of famous people named Steven, along with photos. How many celebrities named Steve can you think of? The famous Stevens...
Every Person Who Has Been Immortalized in a Google Doodle 57k VIEWS Who are the most influential people in history? Here's a good place to start. This is a list of every person who has ev...

Steve Irwin is also found on...