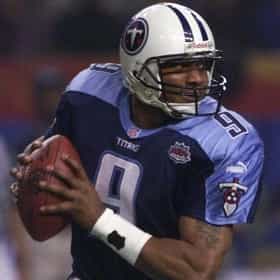 Stephen LaTreal McNair (February 14, 1973 – July 4, 2009), nicknamed Air McNair, was an American football quarterback in the National Football League (NFL). He spent most of his career with the Houston / Tennessee Oilers / Titans and also played for the Baltimore Ravens.McNair played college football at Alcorn State in Lorman, Mississippi, where he won the 1994 Walter Payton Award as the top player in NCAA Division I-AA. He was drafted third overall by the NFL's Houston Oilers in 1995, becoming the team's regular starting quarterback in 1997, their first season in Tennessee (though he started six games over the prior two seasons in Houston), and remained the starting quarterback for ... more on Wikipedia

Steve McNair is ranked on...

Steve McNair is also found on...