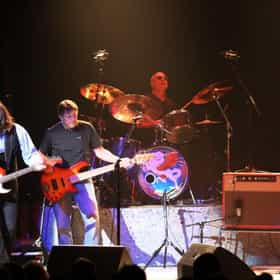 The Steve Miller Band is an American rock band formed in 1966 in San Francisco, California. The band is managed by Steve Miller on guitar and lead vocals, and is best known today for a string of mid-1970s hit singles that are staples of classic rock radio, as well as several earlier acid rock albums. Steve Miller left his first band to move to San Francisco and form the Steve Miller Blues Band. Shortly after Harvey Kornspan negotiated the band’s landmark contract with Capitol Records in 1967, the band shortened its name to 'Steve Miller Band'. In February 1968, the band recorded its debut album Children of the Future. They went on to produce albums Sailor, Brave New World, Your Saving ... more on Wikipedia

Steve Miller Band is ranked on...

#138 of 2,187 People who voted for Steve Miller Band... People in the Midwest are 2x more likely to vote for this The Greatest Musical Artists of All Time 13.4M VOTES When VH1 polled fellow artists to name the greatest artists of all time, it seemed like a good idea---but in reality, the li...
#64 of 2,219 People who voted for Steve Miller Band... People over 50 are 2x more likely to vote for this also upvote Star Trek Franchise on The Best Space Movies The Best Rock Bands of All Time 3.2M VOTES There are thousands of rock bands that have existed throughout the decades ever since the dawn of rock and roll, but only th...
#106 of 626 The Greatest Live Bands of All Time 328.3k VOTES List of the greatest live bands or artists of all time, created and ranked by music fans worldwide asks the question "w...
#63 of 353 The Greatest Classic Rock Bands 475.9k VOTES The greatest classic rock bands of all time embody the spirit of a generation of people who just wanted to rock. These top c...
#19 of 354 The Greatest American Rock Bands 1.3M VOTES Some of the greatest bands in rock history are from the United States. While the merits of their musical prowess can be fair...
#99 of 383 The Best Pop Artists of the 1980s 370k VOTES The 1980s was a huge decade in terms of breaking pop stars. 80s artists benefited from the rising popularity of cable televi...
#40 of 107 Which Bands Or Musicians Do You Most Want To See Before They (Or You) Kick The Bucket? 35.7k VOTES There's a certain energy associated with a live performance that just can't be replicated or synthesized by a single album. ...
#362 of 540 The Greatest Pop Groups & Artists of All Time 584.5k VOTES For years, pop music has dominated your radio dial. No matter where you listen, there's no doubt that pop music bands and po...
#123 of 673 The Best Alternative Bands/Artists 195k VOTES At the end of the 1980s, at the peak of glam rock and hair metal, a new genre began to emerge from the underground. Since it...
#190 of 360 The Best Progressive Metal Bands 36.6k VOTES The beauty of progressive metal is that it combines the genres of progressive rock and heavy metal to crate a genre that is ...
#10 of 48 The Best Heartland Rock Bands/Artists 3.1k VOTES There a few things in music that are more American that heartland rock. Bands in this genre focus on everyday, average Ameri...