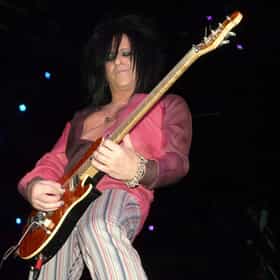 Steve Stevens (born Steven Bruce Schneider; May 5, 1959) is an American guitarist and songwriter. He is best known as Billy Idol's guitarist and songwriting collaborator, and for his lead guitar work on the theme to Top Gun – "Top Gun Anthem" – for which he won a Grammy in 1987: Best Pop Instrumental Performance. A session guitarist, he has played for Michael Jackson, Rick Ocasek, Robert Palmer and many others. Stevens was in Vince Neil's band in 1993, touring and recording on Neil's album Exposed. In 1995, Stevens and Idol were briefly members of the group Neurotic Outsiders. Stevens was a founding member of the supergroup Bozzio Levin Stevens, which released Black Light ... more on Wikipedia

Steve Stevens is ranked on...

#258 of 655 The Greatest Guitarists Of All Time 631.2k VOTES The best guitarists of all time, voted on and ranked by tens of thousands of music fans, with photos and other info. Wi...
#120 of 231 The Best Metal Guitarists and Guitar Teams 248.6k VOTES List of the greatest metal guitarists of all time, with photos. Clearly, the list contains a broad selection of guitarists w...
Famous Lead Guitarists 29.9k VIEWS A List of Famous Lead Guitarists with photos! These are musicians who are masters of their craft. While it is often the sing...
Celebrities Born On Cinco De Mayo 2.5k VIEWS Here are all the famous people who were born on May 5th, Cinco de Mayo. Cinco de Mayo is a Mexican celebration mea...

Steve Stevens is also found on...