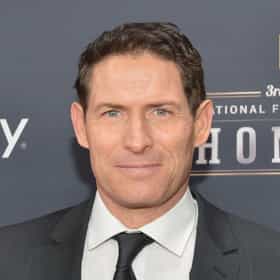 Jon Steven Young (born October 11, 1961) is a former professional American football quarterback who played 15 seasons in the National Football League (NFL) and is best known for his 13 seasons with the San Francisco 49ers. He also played for the NFL Tampa Bay Buccaneers and the Los Angeles Express of the United States Football League (USFL). Young played college football for Brigham Young University, setting school and NCAA records en route to being runner-up for the 1983 Heisman Trophy. Young was named the AP's NFL Most Valuable Player in 1992 and 1994, and was the MVP of Super Bowl XXIX. During his 1994 MVP campaign, he set a new NFL record for passer rating at 112.8. He is a member ... more on Wikipedia

Steve Young is ranked on...

Steve Young is also found on...