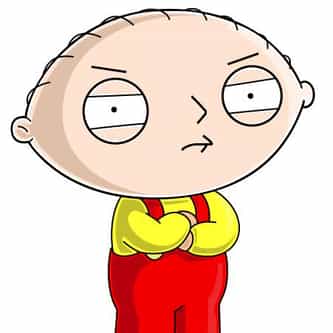 Stewart Gilligan "Stewie" Griffin is a main character from the animated television series Family Guy. Once obsessed with violence and matricide, Stewie is the youngest child of Peter and Lois Griffin, and the brother of Chris and Meg. Over the duration of the series, he has also come to have a very close friendship with the family's anthropomorphic dog, Brian. Stewie is considered to be the show's breakout character. Wizard magazine rated him the 95th greatest villain of all ... more on Wikipedia

Stewie Griffin IS LISTED ON