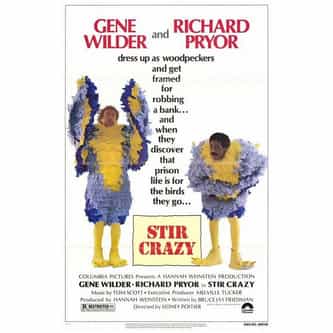 Tagline
Two jailbirds who just want out of the cage.

Stir Crazy is a 1980 American comedy film directed by Sidney Poitier and starring Gene Wilder and Richard Pryor as down-on-their-luck friends who are given 125-year prison sentences after being framed; while in prison they befriend other inmates and ultimately escape. ... more on Wikipedia

See No Evil, Hear No Evil

Stir Crazy IS LISTED ON