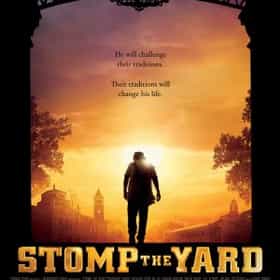 Stomp the Yard is a 2007 drama and dance film produced by Rainforest Films and released through Sony Pictures' Screen Gems division on January 12, 2007. Directed by Sylvain White, Stomp the Yard centers on DJ Williams, a college student at a fictional historically Black university who pledges to join a fictional Greek-letter fraternity. The film's central conflict involves DJ's fraternity competing in various stepping competitions against a rival fraternity from the same school. The film's script was written by Robert Adetuyi, working from an original draft by Gregory Ramon Anderson. The film was originally titled Steppin', but to avoid confusion over the 2006 film Step Up, the title ... more on Wikipedia

Stomp the Yard is ranked on...

Stomp the Yard is also found on...