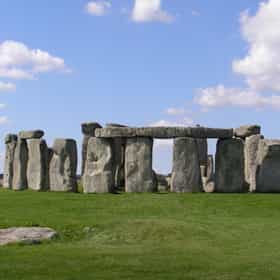 Stonehenge is a prehistoric monument located in Wiltshire, England, about 2 miles west of Amesbury and 8 miles north of Salisbury. One of the most famous sites in the world, Stonehenge is the remains of a ring of standing stones set within earthworks. It is in the middle of the most dense complex of Neolithic and Bronze Age monuments in England, including several hundred burial mounds. Archaeologists believe it was built anywhere from 3000 BC to 2000 BC. Radiocarbon dating in 2008 suggested that the first stones were raised between 2400 and 2200 BC, whilst another theory suggests that bluestones may have been raised at the site as early as 3000 BC. The surrounding circular earth bank ... more on Wikipedia

How Was Stonehenge Actually Built? 1.1k votes A huge yet ancient stone circle in southwestern England, Stonehenge has inspired more questions than answers. As such, archa...
The Strangest Stonehenge Replicas To Visit Around The World 377 views Stonehenge is one of the best-known Neolithic sites in all the world, so it shouldn't come as much of a surprise that people...

Stonehenge is ranked on...

#9 of 194 Historical Landmarks to See Before You Die 75.6k VOTES Historical places to visit before you die, ranked by history and travel buffs worldwide. Anyone can vote on this list of fam...
#13 of 17 17 Photos Of Historical Landmarks Like You Probably Haven't Seen Them Before 7.8k VOTES Certain locations and landmarks across the planet are likely immortalized in your mind's eye. You can probably picture the E...
#17 of 30 30+ Famous Places Seen From a New Perspective 18.9k VOTES You've seen these places and landmarks before, but not like this. These fascinating photos of 30 famous places from 30 new p...
#5 of 16 Tourist Destinations People Say You Have To Go To That Are Actually Terrible 4.2k VOTES Going on vacation doesn't always mean going to a sunny beach somewhere exotic and relaxing on the sand. Many people ins...
#19 of 31 People who voted for Stonehenge... also upvote Star Wars Franchise on The Most Rewatchable Movies are 18x more likely to vote for Temple of Artemis on this list 31 Amazing LEGO Versions of Famous Monuments 13k VOTES LEGO versions of famous monuments recreate some of the most beautiful buildings in the world along with some of the top natu...
#2 of 15 Historical Events You Most Want To Go Back and See 14.7k VOTES Every history buff has considered the historical events they would want to witness—from the construction of the pyramids to ...
Amazing Google Satellite Images Of Famous Places Around The World 3.9k VIEWS Thanks to Google Earth, we can view amazing satellite imagery of nearly any location on the planet. These photos are not jus...
#1 of 58 The Top Must-See Attractions in England 2.5k VOTES List of top places to visit in England. What are the best things to do in England? This list ranks the most popular attracti...
#5 of 35 The Best Day Trips from London 329 VOTES List of the best day trips from London. This list includes some of the greatest side trips from London, including Stoneh...