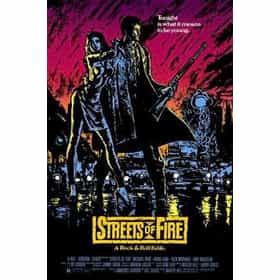 Streets of Fire is a 1984 film directed by Walter Hill and co-written by Hill and Larry Gross. It was described in previews, trailers, and posters as "A Rock & Roll Fable". It is an unusual mix of musical, action, drama, and comedy with elements both of retro-1950s and 1980s. The film stars Michael Paré as a soldier of fortune who returns home to rescue his ex-girlfriend who has been taken by Raven, the leader of a biker gang. Some of the film was shot on the backlot of Universal Studios in California on two large sets covered in a tarp 1,240 feet long by 220 feet wide so that night scenes could be filmed during the day. ... more on Wikipedia

Streets of Fire is ranked on...

Streets of Fire is also found on...