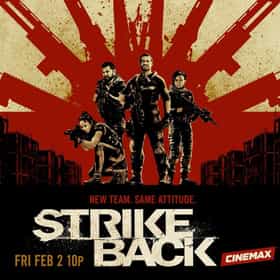 Strike Back is a British/American action and military television series, based on a novel of the same name by novelist and former Special Air Service soldier Chris Ryan. The series follows the actions of Section 20, a secretive branch of the British Defence Intelligence service, who operate several high risk, priority missions throughout the globe. The series began broadcasting on Sky1 on 5 May 2010, showing the first six-part series. After a second series was commissioned, it was announced that Cinemax would co-produce the franchise. The first episode of the ten-part second series, under the banner title Project Dawn in the United Kingdom, first aired on Cinemax on 12 August 2011. The ... more on Wikipedia

Strike Back is ranked on...