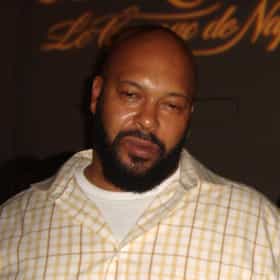 Marion Hugh "Suge" Knight Jr. (; born April 19, 1965) is an American record producer, music executive, former American football player and convicted felon. He is best known as the co-founder and former CEO of Death Row Records, which rose to dominate the rap charts after Dr. Dre's breakthrough album The Chronic in 1992, and enjoyed several years of chart successes for artists including 2Pac, Dr. Dre, Snoop Dogg, Outlawz and Tha Dogg Pound. Suge Knight is also known for his numerous legal issues. In September 2018, Knight pleaded no contest to voluntary manslaughter in a fatal 2015 hit-and-run and was sentenced to 28 years in prison. ... more on Wikipedia

Suge Knight is ranked on...

#375 of 1,041 Celebrity Death Pool 2020 108.6k VOTES They may be beloved performers, award winners, or game changers, but no matter how famous, you can’t escape death. This cele...
#294 of 511 Celebrities Nobody Cares About Anymore 3.4M VOTES Some of the greatest actors of all time have, in recent days, turned into a bunch of washed-up hacks that would be somehow b...
#24 of 34 Celebrities Who NEED to Write a Tell-All 6k VOTES The inner workings of the human mind are a mystery and there are tons of celebrities who should write a tell-all, so we can ...
60+ Celebrities Accused of Horrible Crimes 1.3M VIEWS We look at celebrities as role models, but many famous people have been accused of horrible crimes. Some of these famous fol...
Famous Inmates at Folsom State Prison 64.9k VIEWS List of Famous Inmates at Folsom State Prison ranked by fame and notoriety. Folsom State Prison is the second oldest prison ...
34 Celebrities Who Played High School Football 90.3k VIEWS Celebrities who played high school football include a variety of actors, musicians, and other celebs who in their early life...
Celebrities Who Live in Malibu 541.4k VIEWS Celebrities who live in Malibu are a lucky bunch. Of all the famous people in California, those who have homes in Malibu get...
Rappers Who Have Beards 10.8k VIEWS Rappers are known for their sense of style and many famous rap stars are usually seen sporting facial hair. Bearded Rap...
Rappers with Jheri Curls 2.6k VIEWS Jheri curl are a popular style in the hip hop community. There are many rappers who have Jheri curls and they come in a vari...
Celebrity Arrests 2010: Celebrities Arrested in 2010 137.2k VIEWS Here is a complete and self-updating list of all famous people arrested in 2010. Famous celebrity arrests are listed below...

Suge Knight is also found on...