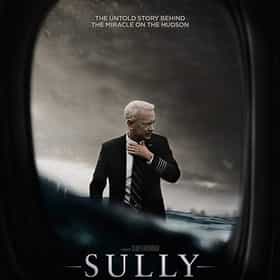 Sully (also known as Sully: Miracle on the Hudson) is a 2016 American biographical drama film directed by Clint Eastwood and written by Todd Komarnicki, based on the autobiography Highest Duty by Captain Chesley "Sully" Sullenberger and Jeffrey Zaslow. The film stars Tom Hanks as Sullenberger, with Aaron Eckhart, Laura Linney, Anna Gunn, Autumn Reeser, Holt McCallany, Jamey Sheridan and Jerry Ferrara in supporting roles. The film follows Sullenberger's January 2009 emergency landing of a passenger jet on the Hudson River, which all 155 passengers and crew survived with only minor injuries, and the subsequent publicity and investigation. ... more on Wikipedia

Sully is ranked on...

#5 of 24 The Best Drama Movies of 2016 682 VOTES Heroic characters, beautiful love stories, and tales of survival comprise the best drama movies of 2016. The best 2016 drama...
#18 of 115 The Best New Drama Films of the Last Few Years 2.3k VOTES Recent drama movies have given audiences lots to think about. The range of topics covered is truly impressive. Whether it's ...
#105 of 219 The Best Historical Drama Movies Of All Time, Ranked 101.5k VOTES Moviegoers rank the best historical drama movies and period pieces of all time below. So what makes a good historical drama ...
#36 of 133 The Best Drama Movies Of The 2010s Decade 1.8k VOTES What are the best drama films of the decade? That's what this list will determine, based on your votes. We want you to choos...
#142 of 324 The Best Warner Bros. Entertainment Movies List 5.8k VOTES List of Warner Bros. Entertainment movies, ranked best to worst, including trailers, genres, and release dates. Warner Bros....
Every '00s News Story That Became A Movie Or TV Show In The 2010s 7.9k VIEWS Big news stories have always been fodder for television and film, but in an era of 24-hour coverage and social media, not to...
#22 of 41 The Best Movies Directed by Clint Eastwood 7k VOTES This is a collection of the best movies directed by Clint Eastwood as voted on by film buffs. If you're wondering, "Wha...