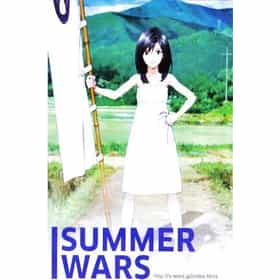 Summer Wars is a 2009 Japanese animated science fiction film directed by Mamoru Hosoda, animated by Madhouse and distributed by Warner Bros. Pictures. The film's voice cast includes Ryunosuke Kamiki, Nanami Sakuraba, Mitsuki Tanimura, Sumiko Fuji and Ayumu Saitō. The film tells the story of Kenji Koiso, a timid eleventh-grade math genius who is taken to Ueda by twelfth-grade student Natsuki Shinohara to celebrate her great-grandmother's 90th birthday. However, he is falsely implicated in the hacking of a virtual world by a sadistic artificial intelligence named Love Machine. Kenji must repair the damage done to it and find a way to stop the rogue computer program from causing any ... more on Wikipedia

Summer Wars is ranked on...

#517 of 598 The Best Animated Films Ever 970.6k VOTES The best animated movies of all time are an assortment of animated movies that rank among the best movies ever made. Wh...
#150 of 190 The Saddest Anime Series of All Time 482.8k VOTES Are you looking for sad anime that will make you cry? Well look no further, because for this list we're ranking the saddest ...
#10 of 31 The Best Anime Like Paprika 130 VOTES The ability to enter someone's mind is a powerful thing, especially when you can go deep into their subconscious. Paprika is...
#4 of 12 The Best Anime Like My Neighbors the Yamadas 18 VOTES Living a simple family life is not as easy, nor as peaceful, as it looks. There's always something to do, and when you have ...
#17 of 1,083 People who voted for Summer Wars... are 28x more likely to vote for Spirited Away on this list are 30x more likely to vote for Howl's Moving Castle on this list The Best Anime Movies of All Time 119.3k VOTES A list of all the best anime movies ever made, many of which are streaming on Netflix and Amazon Prime. This anime movie lis...
#61 of 108 The Best Movies With War in the Title 861 VOTES Have you ever noticed how many movies there are with war in the name? This list ranks the best movies with war in the title,...
#8 of 24 The Best PG Anime Movies of All Time, Ranked 923 VOTES The best PG anime movies are great for audiences of all ages, unlike super violent animes such as Attack on Titan. They prov...
#85 of 171 The Best PG Animation Movies 8.2k VOTES List of PG animation movies, ranked from best to worst with movie trailers when available. This list takes the best PG anima...
#4 of 13 The Best Anime Like Digimon 174 VOTES For many anime fans, Digimon was their gateway into the medium. The first series follows seven children who are tr...
#26 of 50 The Best Animation Movies of 2009 943 VOTES List of the best 2009 animation movies, ranked by how many upvotes they've received by other fans of the genre. Animated mov...
12 Anime To Watch For Unique And Gorgeous Animation 46.6k VIEWS Look, we all love anime. It's over-the-top, high energy, and can serve as a much needed reprieve from the doldrums of everyd...

Summer Wars is also found on...