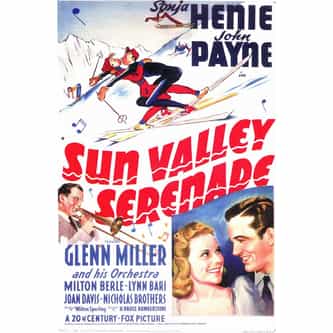 Sun Valley Serenade is a 1941 musical film starring Sonja Henie, John Payne, Glenn Miller, Milton Berle, and Lynn Bari. It features the Glenn Miller Orchestra as well as dancing by the Nicholas Brothers and Dorothy Dandridge, performing "Chattanooga Choo Choo", which was nominated for an Academy Award for Best Song, was inducted into the Grammy Hall of Fame in 1996, and was awarded the first Gold Record for sales of 1.2 million. ... more on Wikipedia

Sun Valley Serenade IS LISTED ON