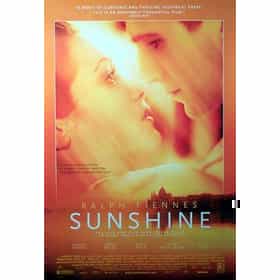 Sunshine is a 1999 historical film written by Israel Horovitz and István Szabó, directed and produced by István Szabó. It follows three generations of a Jewish family during the changes in Hungary from the beginning of the 20th century to the period after the 1956 Hungarian Revolution. The central male protagonist of all three generations is portrayed by Ralph Fiennes. The film also stars the real-life mother and daughter team of Rosemary Harris and Jennifer Ehle as well as Rachel Weisz and John Neville. Although fictional, the film weaves events drawn from several real sources into the story. The Sunshine family's liquor business was based on the Zwack ... more on Wikipedia

Sunshine is ranked on...

Sunshine is also found on...