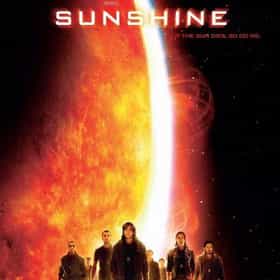 Sunshine is a 2007 British science fiction thriller film directed by Danny Boyle. The film was adapted from a screenplay written by Alex Garland about the crew of a spacecraft on a dangerous mission to the Sun. In 2057, with the Earth in peril from the Sun, the crew is sent on a mission to reignite the star with a nuclear device with the mass of Manhattan. The script was based on a scientific back-story that took the characters on a psychological journey. The director cast a group of international actors for the film, and had the actors live together and learn about topics related to their roles, as a form of method acting. ... more on Wikipedia

The Best Songs About The Sun 4.1k votes Nothing beats a beautiful sunny day, except maybe a song about a beautiful sunny day. Here are the greatest songs about the ...
Why Sunshine Is The Greatest Space Movie Ever Made 346 votes When you think about the best Danny Boyle movies, a few that immediately come to mind: Trainspotting. 28 Days Later. Slumdog...

Sunshine is ranked on...

Sunshine is also found on...