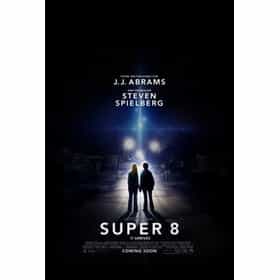 Super 8 is a 2011 American science fiction horror film written, co-produced, and directed by J. J. Abrams and produced by Steven Spielberg. The film stars Joel Courtney, Elle Fanning, and Kyle Chandler and tells the story of a group of young teenagers who are filming their own Super 8 movie when a train derails, releasing a dangerous presence into their town. The movie was filmed in Weirton, West Virginia and surrounding areas. Super 8 was released on June 10, 2011, in conventional and IMAX theaters in the US. The film was well received, with critics praising the film for its nostalgia, visual effects, musical score, and for the performances of its young actors, particularly those of ... more on Wikipedia