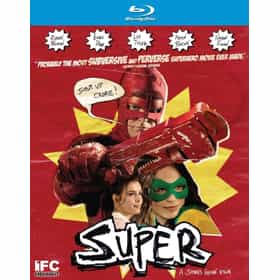 Super is a 2010 American superhero dark comedy-drama film written and directed by James Gunn, starring Rainn Wilson, Ellen Page, Liv Tyler, Kevin Bacon and Nathan Fillion. The film premiered at the 2010 Toronto International Film Festival and was released in theaters in the United States on April 1, 2011 and on video on demand on April 13, 2011. The film was released unrated in U.S. theaters, and later received an R rating for its DVD/Blu-ray release. ... more on Wikipedia

Super is ranked on...

Super is also found on...