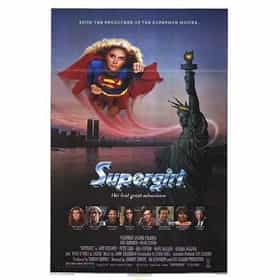 Supergirl is a 1984 British superhero film directed by Jeannot Szwarc. It is based on the DC Comics character of the same name and is a spin-off to Alexander and Ilya Salkind's Superman film series. The film stars Faye Dunaway, Helen Slater as Supergirl, and Peter O'Toole, with Marc McClure reprising his role as Jimmy Olsen from the Superman films. He was the only actor to do so. The film was released in the United Kingdom on July 19, 1984 and failed to impress critics and audiences alike. Dunaway and O'Toole earned Golden Raspberry Award nominations for Worst Actress and Worst Actor, respectively, However, Slater was nominated for a Saturn Award for her performance by the Academy of ... more on Wikipedia

Supergirl is ranked on...

Supergirl is also found on...