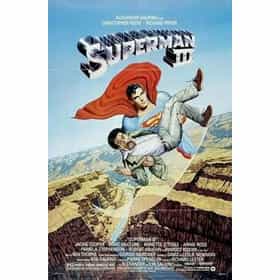 Superman III is a 1983 British-American superhero film directed by Richard Lester. It is the third film in the Superman film series based upon the long-running DC Comics superhero. The film is the last Superman film to be produced by Alexander Salkind and Ilya Salkind, and stars Christopher Reeve, Richard Pryor, Annette O'Toole, Annie Ross, Pamela Stephenson, and Robert Vaughn. This film is followed by Superman IV: The Quest for Peace, released on July 23, 1987. Although the film still managed to recoup its budget of $39 million, it was less successful than the first two Superman movies, both financially and critically. ... more on Wikipedia

Superman III is ranked on...

Superman III is also found on...