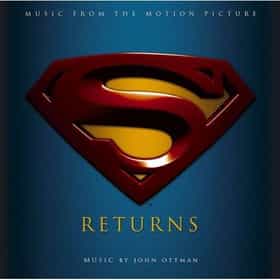 Superman Returns is a 2006 American superhero film directed and produced by Bryan Singer. It is based on the DC Comics character Superman and serves as an homage sequel to the motion pictures Superman and Superman II, ignoring the events of Superman III and Superman IV. the film stars Brandon Routh as Clark Kent/Superman, Kate Bosworth as Lois Lane, Kevin Spacey as Lex Luthor, with James Marsden, Frank Langella, and Parker Posey. The film tells the story of the title character returning to Earth after a five-year absence. He finds that his love interest Lois Lane has moved on with her life, and that his archenemy Lex Luthor is plotting a scheme that will destroy him and the world. ... more on Wikipedia

Superman Returns is ranked on...

Superman Returns is also found on...