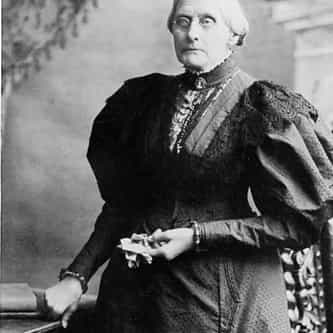 Susan B. Anthony (February 15, 1820 – March 13, 1906) was an American social reformer and women's rights activist who played a pivotal role in the women's suffrage movement. Born into a Quaker family committed to social equality, she collected anti-slavery petitions at the age of 17. In 1856, she became the New York state agent for the American Anti-Slavery Society. In 1851, she met Elizabeth Cady Stanton, who became her lifelong friend and co-worker in social reform activities, primarily ... more on Wikipedia

Susan B. Anthony IS LISTED ON

#316 of 403
428.6k VOTES Famous Role Models We'd Like to Meet In Person
#742 of 1,357
730k VOTES The Greatest Minds of All Time
#108 of 2,437
2.2M VOTES The Most Influential People of All Time
#7 of 319
114.4k VOTES The Most Inspiring (Non-Hollywood) Female Role Models
#4 of 24
5.5k VOTES Famous American Women Who Deserve Their Faces On Money
#45 of 433
248.1k VOTES The Most Important Leaders in U.S. History
25.7k VIEWS Who Is The Most Famous Susan In The World?
60.4k VIEWS Every Person Who Has Been Immortalized in a Google Doodle
87.4k VIEWS Famous People Who Use Initials In Their Names
11.7k VIEWS Famous Daughters of the American Revolution Members
40.7k VIEWS List of First Wave Feminists
Famous People From Massachusetts Famous People Who Don't Drink Alcohol List of Famous Women's Rights Activists People On Stamps: List Of People On US Postage