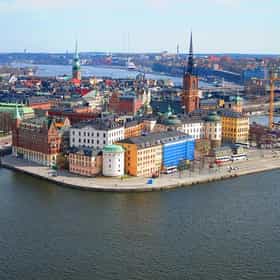 Sweden, officially the Kingdom of Sweden, is a Scandinavian country in Northern Europe. Sweden borders Norway and Finland, and is connected to Denmark by a bridge-tunnel across the Öresund. At 450,295 square kilometres, Sweden is the third-largest country in the European Union by area, with a total population of about 9.7 million. Sweden has a low population density of 21 inhabitants per square kilometre, with the population mostly concentrated in the southern half of the country. About 85% of the population lives in urban areas. Southern Sweden is predominantly agricultural, while the north is heavily forested. Sweden is part of the collective geographical group of nations ... more on Wikipedia

Sweden is ranked on...

Sweden is also found on...