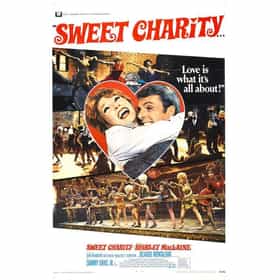 Sweet Charity, full title of which is Sweet Charity: The Adventures of a Girl Who Wanted to Be Loved, is a 1969 American musical film directed and choreographed by Bob Fosse, written by Neil Simon, and with music by Cy Coleman and Dorothy Fields. It stars Shirley MacLaine and features John McMartin, Sammy Davis, Jr., Ricardo Montalban, Chita Rivera, Paula Kelly and Stubby Kaye. It is based on the 1966 stage musical of the same name – which Fosse had also directed and choreographed – which in turn is based on Federico Fellini, Ennio Flaiano and Tullio Pinelli's screenplay for Fellini's film Le Notti di Cabiria. However, where Fellini's black-and-white film concerns the romantic ... more on Wikipedia

Sweet Charity is ranked on...

Sweet Charity is also found on...