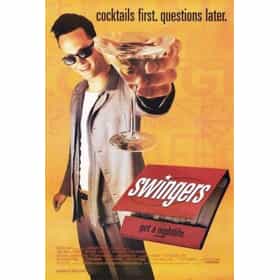 This film is a 1996 comedy-drama film about the lives of single, unemployed actors living on the 'eastside' of Hollywood, California during the 1990s swing revival. Written by Jon Favreau and directed by Doug Liman, the movie starred Favreau and Vince Vaughn, and also featured performances by Ron Livingston and Heather Graham. A critical and commercial hit the film help propel Favreau, Livingston, and Vaughn to stardom while also launching Doug Liman's directing career as he won the MTV award for Best New Filmmaker This film was rated #57 on Bravo's "100 Funniest Movies." The film was honored on the 2007 Spike TV Guys' Choice Awards. ... more on Wikipedia

Swingers is ranked on...

Swingers is also found on...