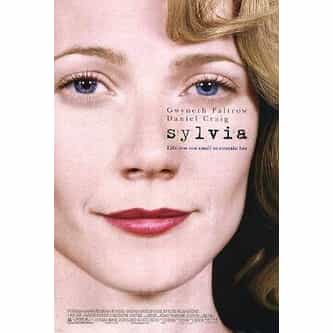 Sylvia is a 2003 British biographical drama film directed by Christine Jeffs and starring Gwyneth Paltrow, Daniel Craig, Jared Harris, and Michael Gambon. It tells the true story of the romance between prominent poets Sylvia Plath and Ted Hughes. The film begins with their meeting at Cambridge in 1956 and ends with Sylvia Plath's suicide in 1963. Frieda Hughes, Sylvia and Ted's daughter, accused the filmmakers of profiting from her mother's death. ... more on Wikipedia

Sylvia IS LISTED ON