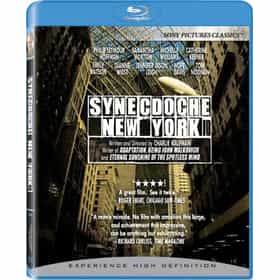 Synecdoche, New York is a 2008 American postmodern drama film written and directed by Charlie Kaufman, and starring Philip Seymour Hoffman. It is Kaufman's directorial debut. The plot follows an ailing theatre director as he works on an increasingly elaborate stage production whose extreme commitment to realism begins to blur the boundaries between fiction and reality. The film premiered in competition at the 61st Annual Cannes Film Festival on May 23, 2008. Sony Pictures Classics acquired the United States distribution rights, paying no money but agreeing to give the film's backers a portion of the revenues. It had a limited theatrical release in the U.S. on October 24, 2008. Despite ... more on Wikipedia

Synecdoche, New York is ranked on...