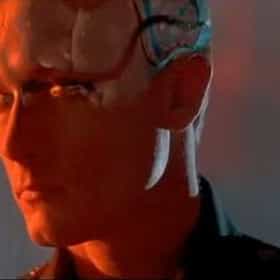 The T-1000, also known as a Series 1000 Terminator, is a fictional shapeshifting robot assassin and the primary antagonist in Terminator 2: Judgment Day and Terminator Genisys, as well as a minor antagonist in Terminator 2: 3-D Battle Across Time. A similar T-1000 Terminator appears in the 2007/08 FOX television series, Terminator: The Sarah Connor Chronicles, where it is referred to as a "T-1001". Created by the series' long-running antagonist, Skynet, the T-1000 is described in Terminator 2 as being composed of a mimetic poly-alloy, whose body is composed of liquid metal that allows it to assume the form of other objects or people, typically terminated victims. Therefore, ... more on Wikipedia