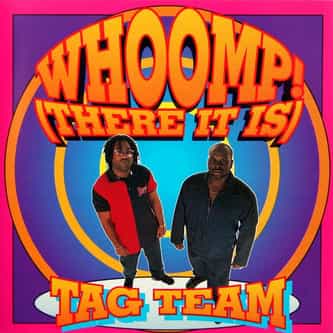 Tag Team was an American hip hop/pop rap duo from Atlanta, Georgia, active from 1993 up to 1995. The duo was made up of Cecil Glenn and Steve Gibson who met at Manual High School in their hometown of Denver, Colorado. They are best known for their #1 R&B and #2 Hot 100 single, "Whoomp!", which was released in 1993. With no other major chart activity after "Whoomp!", except for two versions of their hit, they are considered a one hit wonder. Tag Team also contributed ... more on Wikipedia

Tag Team IS LISTED ON