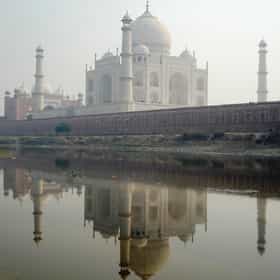 The Taj Mahal is a white marble mausoleum located in Agra, Uttar Pradesh, India. Commissioned in 1632 by the Mughal emperor Shah Jahan to house the tomb of his third wife, Mumtaz Mahal, the Taj Mahal stands on the southern bank of the Yamuna River. The mausoleum is widely recognized as "the jewel of Muslim art in India" and remains as one of the world’s most celebrated structures and a symbol of India’s rich history. Regarded by many as the best example of the Mughal architecture, it is a perfect blend combining elements from Islamic, Persian, Ottoman Turkish as well as Indian architectural styles. The famed mausoleum complex of white domed marble of the Taj Mahal actually is ... more on Wikipedia

Taj Mahal is ranked on...

#4 of 262 The Most Beautiful Buildings in the World 94.2k VOTES Pictures of the most beautiful buildings in the world can hardly do justice to some of the most breathtaking structures on E...
#20 of 28 The Biggest Tourist Traps on Earth 131.7k VOTES If you’re big on traveling, then you’ve undoubtedly come across a few tourist traps in your time. Whether you’ve been sucked...
#3 of 193 Historical Landmarks to See Before You Die 76.9k VOTES Historical places to visit before you die, ranked by history and travel buffs worldwide. Anyone can vote on this list of fam...
#19 of 30 30+ Famous Places Seen From a New Perspective 19.3k VOTES You've seen these places and landmarks before, but not like this. These fascinating photos of 30 famous places from 30 new p...
#27 of 31 People who voted for Taj Mahal... also upvote Twilight Saga Franchise on The Most Overrated Movies of All Time are 8x more likely to vote for Westminster Abbey on this list 31 Amazing LEGO Versions of Famous Monuments 13.3k VOTES LEGO versions of famous monuments recreate some of the most beautiful buildings in the world along with some of the top natu...
#1 of 57 The Top Must-See Attractions in India 2.5k VOTES List of top things to do in India. What are the best things to see in India? This list ranks the most popular tourist attrac...
How All The World's Natural And Man-Made Wonders Are Being Affected By Climate Change 3.2k VIEWS Politicians around the world have been at odds for decades over the issue of climate change. While the vast majority of scie...

Taj Mahal is also found on...