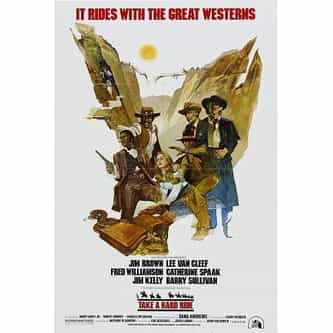 Take a Hard Ride is a 1975 Italian-American Western film directed by Antonio Margheriti. It stars Lee Van Cleef, Jim Brown, Fred Williamson and Jim Kelly. Pike, a stone faced cowboy, meets up with Tyree, a dishonest gambler. Together with a mute Indian scout, Kashtok, the trio attempts to transport $86,000 across hundreds of miles of Western wasteland to deliver it to the widow of Pike's former employer. Co-financed by Italian and American producers, filming took place on location in the ... more on Wikipedia

Take a Hard Ride IS LISTED ON