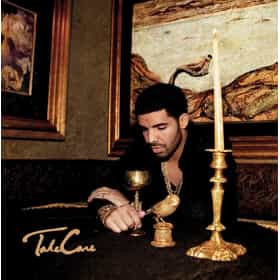 Take Care is the second studio album by Canadian recording artist Drake; it was released on November 15, 2011, by Aspire Music Group, Young Money Entertainment, Cash Money Records and Republic Records. The album serves as a follow-up to his debut album Thank Me Later. Production for the album took place during 2010 to 2011 and was handled by Noah "40" Shebib, Boi-1da, T-Minus, Just Blaze, The Weeknd and Jamie xx among others. With the album, Drake sought to record a more cohesive recording than his debut album, which he felt was rushed in its development. Expanding on the sonic aesthetic of his debut album, Take Care features an atmospheric sound that is characterized by ... more on Wikipedia

Take Care is ranked on...

#192 of 891 The Best Hip Hop Albums of All Time 748k VOTES What are the best hip hop albums of all time? The answer, of course, is totally subjective. Everyone has differing opinions ...
#1 of 10 The Best Drake Albums of All-Time 1.5k VOTES Drake is one of the greatest rappers of all time and easily one of the best artists today. Here's a list of the best Drake&n...
#9 of 37 The Best Grammy-Nominated Rap Albums of the 2010s 1.4k VOTES The 2010s saw the entrance of bold new voices onto the rap scene. From thought-provoking concept albums to surprising self...
#66 of 193 The Greatest Albums Of The 2010s, Ranked 8.3k VOTES Here are the best albums of the decade, ranked by fans everywhere. Featuring popular music from some of the b...