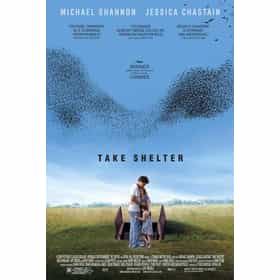 Take Shelter is a 2011 American drama-thriller film written and directed by Jeff Nichols and starring Michael Shannon and Jessica Chastain. Plagued by a series of apocalyptic visions, a young husband and father questions whether to shelter his family from a coming storm, or from himself. It was nominated for four Saturn Awards including Best Horror or Thriller Film and Best Actress for Chastain, and won Best Writing for Nichols and Best Actor for Shannon. ... more on Wikipedia

Take Shelter is ranked on...

Take Shelter is also found on...