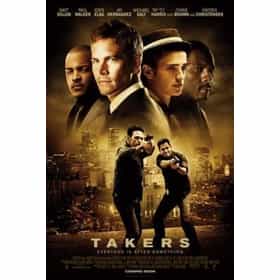 Takers is a 2010 American crime action thriller film directed by John Luessenhop from a story and screenplay written by Luessenhop, Gabriel Casseus, Peter Allen, John Rogers, and Avery Duff. It features an ensemble cast that includes Matt Dillon, Idris Elba, Hayden Christensen, Paul Walker, Michael Ealy, and Zoë Saldaña. The film was released on August 27, 2010. Elba and Brown had starred together in the 2007 film This Christmas. The film follows a group of professional bank robbers who specialize in spectacular robberies, as they are pulled into one last job by a recently paroled cohort only to be pitted against a hard-boiled detective and his partner who interrupt their ... more on Wikipedia

Takers is ranked on...