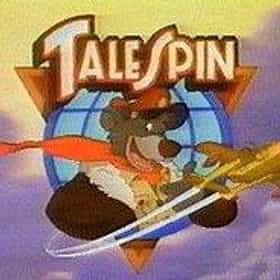 TaleSpin is a half-hour animated adventure series based in the fictional city of Cape Suzette, that first aired in 1990 as a preview on The Disney Channel and later that year as part of The Disney Afternoon, with characters adapted from Disney's 1967 animated feature The Jungle Book, which was theatrically rereleased in the summer before this show premiered in the fall. The name of the show is a play on "tailspin," the rapid descent of an aircraft in a steep spiral. The two words in the show's name, tale and spin, are a way to describe telling a story. The show is one of the nine Disney Afternoon shows to use established Disney characters as the main characters, with the ... more on Wikipedia

TaleSpin is ranked on...

#82 of 728 The Best Cartoons of All Time 2.9M VOTES There have been many fantastic animated TV shows throughout the history, but which ones are the best? Some people think that...
#24 of 249 The Best Saturday Morning Cartoons for Mid-'80s — '90s Kids 2.1M VOTES These are the best Saturday morning cartoons from the '80s and '90s. Thankfully, with the advent of the DVD, the DVR, and ev...
#26 of 380 The Best Kids Cartoons of All Time 1.2M VOTES This list contains information about the best kids cartoons, ranked by your votes. Over the years, there have been tons of g...
#85 of 487 People who voted for TaleSpin... People Age 30 to 49 are 2x more likely to vote for this The Greatest Animated Series Ever Made 620.2k VOTES The top animated series of all time include some of the best TV shows ever to flicker in your living room (or on your comput...
#36 of 129 The Best Cartoons of the '90s 747.3k VOTES The best cartoons of the 90s are those the top animated series that ran between the years of 1990 and 2000 and features Nick...
#649 of 1,176 People who voted for TaleSpin... People under 30 are 2x more likely to vote for this The Greatest TV Shows Of All Time 1.4M VOTES Choosing the best TV shows of all time means taking into account the best TV dramas, the best TV comedies, the best cartoons...
#13 of 187 The Best TV Shows You Can Watch On Disney+ 12.9k VOTES Launched in the fall of 2019, Disney+ offered new shows based on Disney, Marvel, and Star Wars properties alongside old favo...
#119 of 594 People who voted for TaleSpin... People on the West Coast are 2x more likely to vote for this The Best TV Theme Songs of All Time 317.8k VOTES The best TV theme songs and TV intros of all time will take you back to some of the greatest moments in TV. Television theme...
#46 of 238 The Greatest Cartoon Theme Songs of All Time 160.3k VOTES For entire generations of kids, some of their most fond memories are of watching Saturday morning cartoons. The animated sho...
#8 of 55 The Best '90s Cartoon Theme Songs 30.9k VOTES The 1990s weren't only about grunge, Bill Clinton and the rise of the Internet, some amazingly talented animators were creat...
#7 of 15 15 Bingeable Animated Series You Didn't Realize Were On Disney+, Ranked 556 VOTES It will come as no great shock to anyone that Disney+ has some major animated series queued up and ready to go for some soli...
#1 of 23 The Best Disney Shows of the '90s 1.2k VOTES How many of you remember racing home from school in the '90s to see what was on The Disney Channel? 1990s Disney shows were ...
#59 of 687 The Greatest Shows of the 1990s, Ranked 254.8k VOTES In the 1990s, television was one of the fastest growing mediums. More TV shows were popping up than ever before, and ratings...
#25 of 134 The Best Cartoon Series TV Shows 39.1k VOTES The very best cartoon series shows on television, ranked from best to worst. This list of the greatest cartoon series shows ...
#70 of 107 The Best Disney Channel TV Shows 197.9k VOTES This list of the top current and cancelled Disney Channel TV series includes the date when each show first aired, as well as...
#26 of 77 The Greatest TV Shows Set in the '30s 400 VOTES The Great Depression spanned the entirety of the 1930s and television shows set in this decade reflect the tumult and worry ...
#4 of 51 The Best Toon Disney TV Shows 10.5k VOTES List of popular Toon Disney shows, ranked from best to worst. This list of the top Toon Disney TV series, both current and...
#6 of 28 The Best Bear Cartoons 253 VOTES Since the beginning of animation, the best cartoons have been filled with animals rather than humans. From Mickey Mouse to T...
#19 of 34 The Best Adventure Kids Shows Ever Made 294 VOTES Kids have an innate need to explore. Part of the reason why kids can't wait to grow up is that they want to leave the confin...
#30 of 50 The Best Action TV Shows For Kids Ever Made 564 VOTES Kids action shows can spark the imagination. A single series can make children believe they can grow up to be globe-trotting...