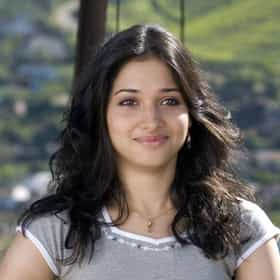 Tamanna Bhatia (born 21 December 1989), known professionally as Tamannaah, is an Indian actress who predominantly appears in Tamil and Telugu films. She has also appeared in several Hindi films. In addition to acting, she also participates in stage shows and is a prominent celebrity endorser for brands and products. In 2005, she made her acting debut at the age of 15 in the Bollywood film, Chand Sa Roshan Chehra and appeared in the Abhijeet Sawant album song "Lafzon main" from the album Aapka Abhijeet, which was also released in 2005, before working in Telugu cinema and Tamil cinema. In the same year, Tamannaah made her Telugu film debut in Sri, and the next year she appeared ... more on Wikipedia

Tamannaah Bhatia is ranked on...

#131 of 156 The Most Beautiful Young Actresses Under 30 1.2M VOTES The most beautiful actresses under 30 are some of the most talented actresses working in Hollywood today. These are all...
#5 of 90 The Most Beautiful Indian Actresses of All Time 149.6k VOTES These photos of Bollywood actresses are some of the most attractive women in the world. Here is a full list of gor...
#4 of 55 The Top Telugu Actresses of All Time 141.5k VOTES Vote for your favorite Telugu actress on this list of Teugu actresses. All the greatest Telugu heroines are here on this lis...

Tamannaah Bhatia is also found on...