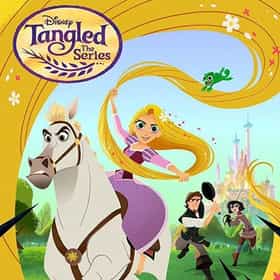 Tangled: The Series (Disney Channel, 2017) is an American animated television series developed by Chris Sonnenburg and Shane Pigmore, based on the 2010 film. Since being freed from Gothel and reunited with her birth parents, Rapunzel (Mandy Moore) adjusts to her life as their daughter and continues to have different misadventures with her boyfriend Eugene Fitzherbert (Zachary Levi), Pascal the Chameleon, Maximus the Horse, and her new handmaiden Cassandra (Eden Espinosa), to uncover the mystery of her new 70 feet-long blonde hair's return. ... more on Wikipedia

Tangled: The Series is ranked on...

#65 of 77 The Best Current TV Shows No One Is Watching 307k VOTES Some of the best shows on TV right now in 2019 are criminally underrated and not watched by nearly enough people. Sure, you'...
#380 of 383 The Best TV Shows of The Last 20 Years 1.5M VOTES This best TV show list represents the combined opinions of thousands of TV fans. Anyone can vote on this list of the best TV...
#28 of 43 All The TV Shows Ending in 2020, Ranked 3.1k VOTES Even as our watchlists fill with great new shows, many of the best TV shows are ending in 2020. While some popular shows, li...
#77 of 187 The Best TV Shows You Can Watch On Disney+ 13.3k VOTES Launched in the fall of 2019, Disney+ offered new shows based on Disney, Marvel, and Star Wars properties alongside old favo...
#9 of 11 The Best Current Disney Channel Shows 24.1k VOTES A list of Disney Channel's best shows currently on-air, ranked by fans. Disney Channel remains one of the top cable networks...
#19 of 38 The Best Disney Channel Cartoons Ever Made 6.4k VOTES Disney Channel has played an integral role in many people's childhoods. Whether you grew up in the 1990s or the 2000s, there...
#12 of 64 The Best Children's Cartoon TV Shows Since 2015 500 VOTES Chances are if you grew up sometime in the latter half of the 20th century, your childhood was filled with amazing anim...