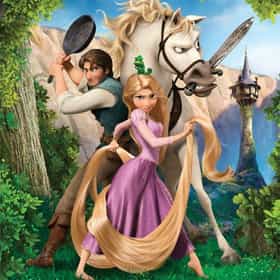 Tangled is a 2010 American computer animated musical fantasy-comedy film produced by Walt Disney Animation Studios and released by Walt Disney Pictures. Loosely based on the German fairy tale "Rapunzel" in the collection of folk tales published by the Brothers Grimm, it is the 50th animated feature in the Walt Disney Animated Classics series. Featuring the voices of Mandy Moore, Zachary Levi, and Donna Murphy, the film tells the story of a lost young princess with long magical hair who yearns to leave her secluded tower. Against her mother's wishes, she accepts the aid of a handsome intruder to take her out into the world which she has never seen. Before the film's release, ... more on Wikipedia

Every Song in Tangled, Ranked by Singability 231 votes Despite looking like a conventional Disney princess flick at first glance, Tangled's twisted tower and terrifying Mother Got...

Tangled is ranked on...

Tangled is also found on...