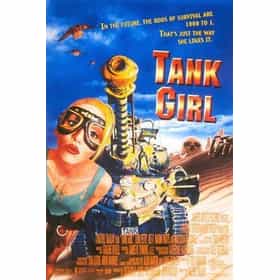 Tank Girl is a 1995 American science fiction action comedy film directed by Rachel Talalay, loosely based on Alan Martin and Jamie Hewlett's comic series of the same name, which originated in the British comic magazine Deadline. It stars Lori Petty, Naomi Watts, Ice-T, and Malcolm McDowell. The film follows a series of confrontations between the draconian corporation Water & Power and both Tank Girl and the Rippers, a group of genetically modified super soldiers, who must team up to defeat the corporation's leader Kesslee. Despite being based on a British comic book that is set in Australia, Tank Girl was filmed in the United States, primarily in White Sands, New Mexico and Tucson, ... more on Wikipedia

Tank Girl is ranked on...

Tank Girl is also found on...