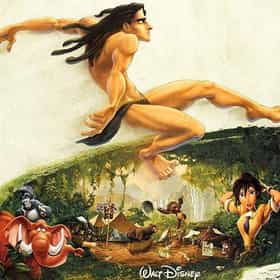 Tarzan is a 1999 American animated adventure musical film produced by Walt Disney Feature Animation and released by Walt Disney Pictures. The 37th film in the Walt Disney Animated Classics, it is based on the story Tarzan of the Apes by Edgar Rice Burroughs, and is the only major motion picture version of the story Tarzan property to be animated. Directed by Chris Buck and Kevin Lima with a screenplay by Tab Murphy, Bob Tzudiker, and Noni White, Tarzan features the voices of Tony Goldwyn, Minnie Driver, Glenn Close, and Rosie O'Donnell with Brian Blessed, Lance Henriksen, Wayne Knight, and Nigel Hawthorne. Tarzan is considered to be the last major box office success of the Disney ... more on Wikipedia

Every Song in Tarzan, Ranked by Singability 180 votes A fixture of popular culture since its first iteration in the early 1900s, Disney took on the story of Tarzan with their cri...

Tarzan is ranked on...

Tarzan is also found on...