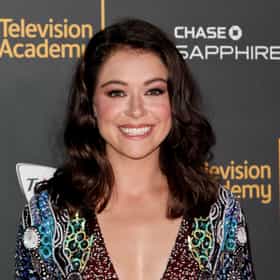 Tatiana Gabriele Maslany (; born September 22, 1985) is a Canadian actress. She is known for portraying multiple characters in the science fiction television series Orphan Black (2013–17), which aired on Space in Canada and BBC America in the United States. For her acting work in Orphan Black, Maslany won a Primetime Emmy Award (2016), a TCA Award (2013), two Critics' Choice Awards (2013 and 2014), and five Canadian Screen Awards (2014–18), in addition to receiving nominations for a Golden Globe Award and a Screen Actors Guild Award. Maslany is the first Canadian actor to win an Emmy in a major dramatic category for a Canadian series.She has also appeared in television series such as ... more on Wikipedia

Tatiana Maslany is ranked on...

#817 of 938 The Best Actresses in Film History 1.1M VOTES The best actresses ever are ranked here in this list of the best actresses in film history. These are the greatest actresses...
#162 of 331 The Best Actresses Working Today 386.8k VOTES List of the best actresses working today, ranked. This list includes many of the greatest actresses in film history, but mor...
#220 of 228 The Best Living American Actresses 166.5k VOTES It takes a lot to make a movie great. There has to be excellent writing, production, direction, editing, and of course, acti...
#193 of 381 The Best American Actresses Working Today 193.1k VOTES There have been plenty of great American actresses throughout film history, but which female American actresses working toda...
#71 of 89 Celebrities Who Should Be A-Listers 119.8k VOTES If pop culture has room enough for multiple A-list Jennifers and Chrises, it has enough time to make some space for cer...
#5 of 16 16 Actresses Who Would Be Perfect As Zatanna 5k VOTES Zatanna Zatara has a rich history in the DC Universe, dating back to her introduction in Hawkman #4 in 1964. She debu...
#401 of 415 Maxim's Nominees for the 2015 Hot 100 191.4k VOTES Here are Maxim's nominees for the 2015 hot 100. This is the issue of Maxim that gentlemen around the world look forward to m...
#20 of 31 The Biggest Breakthrough Celebrities of 2013 5.3k VOTES Who were the biggest breakthrough celebrities of 2013? The year brought a ton of fresh faces to the celebrity scene. This li...
#24 of 48 Biggest Snubs of the 2016 Golden Globe Nominations 8.1k VOTES The most shocking 2016 Golden Globe nomination snubs are those talented actors, actresses, and filmmakers that, for one reas...
#45 of 50 The Biggest Oscar Snubs of 2018 7k VOTES Academy Award snubs are par for the course when it comes to Oscar season. As what constitutes a snub is somewhat subjective,...
Lifetime Movies Actors and Actresses 14.6k VIEWS Lifetime Movies employs a wide range of actors -most of which you will recognize from more than just TV movies. Lifetime act...
Every Single Celebrity Who Has Guest Starred on Drunk History 7.4k VIEWS Comedy Central's Drunk History has it all, from the boozy narration of notable historic moments to rotating cast members who...
Famous People Named Tatiana 2k VIEWS Ever thought about how many famous people named Tatiana are out there? This list of celebrities named Tatiana will show yo...

Tatiana Maslany is also found on...