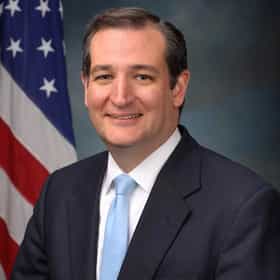 Rafael Edward Cruz (born December 22, 1970) is an American politician and attorney serving as the junior United States Senator for Texas since 2013. He was the runner-up for the Republican nomination for President of the United States in the 2016 election. Cruz holds degrees from Princeton University and Harvard Law School. From 1999 to 2003, he held various government positions, serving as Director of the Office of Policy Planning at the Federal Trade Commission (FTC), as an Associate Deputy Attorney General at the United States Department of Justice, and as a Domestic Policy Advisor to George W. Bush during Bush's 2000 presidential campaign. Cruz served as Solicitor General of Texas ... more on Wikipedia

Ted Cruz's Former Roommate Hates Him and It's Hilarious 139.3k views We’ve all had horrendous, no good, toxic roommates. But none of us have had the distinct pleasure of living with one of the ...
Everything That People Have Said Ted Cruz Looks Like, Ranked 6.2k votes Ted Cruz. He's a candidate running for president. He's a real conservative's conservative and he's looking to lock up the Re...

Ted Cruz is ranked on...

Ted Cruz is also found on...