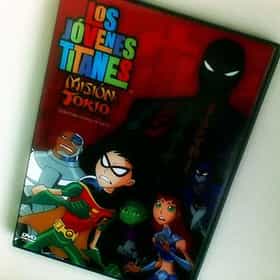 Teen Titans is an American TV show based on the DC Comics characters of the same name, that premiered on Cartoon Network and The WB in 2003. It is based primarily on the run of stories by Marv Wolfman and George Pérez in the early 1980s New Teen Titans comic book series. The show was created by Glen Murakami, developed by David Slack, and produced by Warner Bros. Animation. The series premiered on Cartoon Network on July 19, 2003 with the episode "Divide and Conquer," and the final half-hour episode "Things Change" aired on January 16, 2006, with the film Teen Titans: Trouble in Tokyo serving as the series finale. A comic book series, Teen Titans Go!, was ... more on Wikipedia

Danny Phantom
The Best Villains the Teen Titans Have Ever Faced 5.4k votes We all love Teen Titans, but who are the best Teen Titans villains of all time? The Teen Titans are a group of young, teenag...
26 Teen Titans Cosplays That Will Give You All The Nostalgia Feels 9.3k votes Never fear, the Teen Titans cosplayers are here! Starfire cosplays, Cyborg cosplays, and Raven cosplays come alive in these ...
'Teen Titans' Fan Theories 748 votes The original Teen Titans series produced five seasons of sophisticated stories that transcended both its comic book source m...
Teen Titans Is The Greatest DC Superhero Cartoon Ever Made, Fight Me 4.5k votes There have been several classic superhero cartoons over the years. Fox Kids' X-Men cartoon, Batman: The Animated Series, Jus...
Which Teen Titan Would You Be, According To Your Zodiac Sign? 22.8k views Bam! Boom! Pow! The Teen Titans are a teenage cast of colorful DC Comics characters that are always ready to protect planet ...
The Best Seasons of Teen Titans 479 votes How can you rank the best seasons of Teen Titans when almost every episode is perfection? We didn't say it was going to be e...
12 Reasons Why 'Young Justice' Is Better Than 'Teen Titans' 2.2k views While Marvel dominated the film world in the 2010s, DC remained king of the animated television serial - a title they first ...
The Worst Teen Titans Members Ever 93 votes The Teen Titans have been a fixture of DC Comics since the team first appeared back in 1964's The Brave and the Bold #54. Wh...

Teen Titans is ranked on...

#78 of 249 The Best Saturday Morning Cartoons for Mid-'80s — '90s Kids 2.1M VOTES These are the best Saturday morning cartoons from the '80s and '90s. Thankfully, with the advent of the DVD, the DVR, and ev...
#6 of 22 The 23 Greatest DC Animated Shows Of All Time 10k VOTES While Marvel might lay claim to box office offerings, the best DC animated shows dominate the world of cartoons and ani...
#10 of 238 People who voted for Teen Titans... People under 30 are 3x more likely to vote for this The Greatest Cartoon Theme Songs of All Time 162.1k VOTES For entire generations of kids, some of their most fond memories are of watching Saturday morning cartoons. The animated sho...
#346 of 594 The Best TV Theme Songs of All Time 320.3k VOTES The best TV theme songs and TV intros of all time will take you back to some of the greatest moments in TV. Television theme...
#34 of 74 The Best Shows You Watched After School in the 2000s 10.9k VOTES The 2000s was a decade of great technological achievements. During this time, we left behind the simpler comforts of the '90...
#5 of 12 Shockingly Dark Finales Of Kids' Shows 55.9k VOTES TV shows aimed at younger audiences have a responsibility to keep things light and playful. No one wants their children expo...
#125 of 156 TV Shows Most Loved by African-Americans 90.4k VOTES This list contains TV shows black people love, whether the shows are current or from the past or contain an all-African-Amer...
#80 of 128 The Best High School TV Shows 134.2k VOTES The best high school TV shows include fantastic dramas that highlight the ups and downs of teenagers. In some cases, these s...
#30 of 239 The Best Cartoons to Watch Stoned 63.6k VOTES Do you often wonder, “what are the best shows to watch high?” Or, more specifically, “what are the best cartoons to watch hi...
#15 of 143 The Best Comic Book & Superhero Shows of All Time 84.6k VOTES List of the best superhero TV shows - only the greatest television series about superheroes in the history of the television...
#5 of 42 The Greatest Cartoon Shows on Kids' WB 23.7k VOTES Kids' WB may go down as the single most consistent block of children's programming of all time. The amount of hit shows they...
#8 of 101 The Best Comic Book Cartoons & Animated Shows 59.5k VOTES A lot of children's first introduction to comic book characters come in the form of animated television shows. Sure, nowaday...
#4 of 50 The Greatest Robin Versions Of All Time 9.7k VOTES Robin, the Boy Wonder, was the first original sidekick in comic books. Robin first premiered in DC Comics in Detective ...
#7 of 76 The Best Comic Book TV Show Theme Songs of All Time 4.2k VOTES Comic books have jumped from the page and to TV with theme songs that often capture just what's great about iconic character...
#1 of 122 The Best Cartoon Network TV Shows 489k VOTES Cartoon Network is one of the all-time best TV channels for action-packed cartoons that both kids and adults can enjoy. This...
#59 of 195 What Shows Do You Most Want on Netflix Streaming? 194.8k VOTES What TV shows do you most want on Netflix streaming? While Netflix does offer some great streaming TV shows, and will likely...
#38 of 136 The Best Cartoon Series TV Shows 39.3k VOTES The very best cartoon series shows on television, ranked from best to worst. This list of the greatest cartoon series shows ...
#8 of 72 The Greatest Animated Superhero TV Series Ever 15.7k VOTES The greatest animated superhero shows are amazing works of art that typically don’t get as much attention as superhero block...
#24 of 267 The Best Adventure TV Shows 5.6k VOTES The very best adventure shows on television, ranked from best to worst. This list of the greatest adventure shows also inclu...
#2 of 51 The Best Action TV Shows For Kids Ever Made 564 VOTES Kids action shows can spark the imagination. A single series can make children believe they can grow up to be globe-trotting...