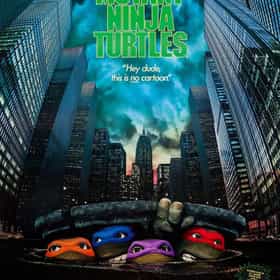 Teenage Mutant Ninja Turtles is a 1990 American live-action film, and the first film adaptation of the Teenage Mutant Ninja Turtles franchise. It was directed by Steve Barron and released on March 30, 1990. This film presents the origin story of Splinter and the Turtles, the initial meeting between them, April O'Neil and Casey Jones, and their first confrontation with The Shredder and his Foot Clan. The film stars Judith Hoag and Elias Koteas in supporting roles, along with the voices of Brian Tochi, Robbie Rist, Josh Pais and Corey Feldman. ... more on Wikipedia

The First Live-Action 'TMNT' Had Some Dark Themes And A Strange Backstory 18.2k views The original Teenage Mutant Ninja Turtles movie, released in 1990, held a special place in the hearts of so many kids. The f...