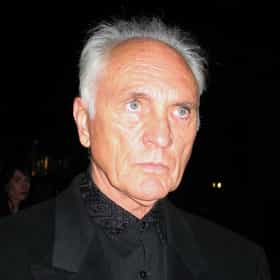 Terence Henry Stamp (born 22 July 1938) is an English actor. After training at the Webber Douglas Academy of Dramatic Art in London he started his acting career in 1962. He has appeared in more than 60 films. His performance in the title role of Billy Budd, his film debut, earned him an Academy Award nomination for Best Supporting Actor and a BAFTA nomination for Best Newcomer. Associated with the swinging London scene of the 1960s, Stamp was among the subjects photographed by David Bailey for a set titled Box of Pin-Ups.Stamp's other major roles include butterfly collector Freddie Clegg in The Collector, archvillain General Zod in Superman and Superman II, tough guy Wilson in The ... more on Wikipedia

Terence Stamp is ranked on...

#262 of 330 People who voted for Terence Stamp... People in the Northeast are 3x more likely to vote for this The Coolest Actors Ever 760.5k VOTES As movie fans, we like to think of our favorite actors as being larger than life. With all of the coverage that these stars ...
#397 of 1,041 Celebrity Death Pool 2020 109.2k VOTES They may be beloved performers, award winners, or game changers, but no matter how famous, you can’t escape death. This cele...
#137 of 258 The Best Marvel Movie Actors Ever 634.1k VOTES Ah Marvel movies. It began in 1944 with serialized films of Captain America and 70 years later, are one of the biggest, most...
#41 of 55 People who voted for Terence Stamp... also upvote Rebecca Romijn on The Most Beautiful Models in the World also upvote Lexa Doig on The Hottest Canadian Actresses The Best English Actors Working Today 34.3k VOTES There have been plenty of great English actors throughout film history, but which male English actors working today are the ...
#60 of 121 The All-Time Best Voice Actors 8k VOTES These are voices you could never put a face to, but you know them as well as you know any actor. Deep voices, squeaky voices...
#41 of 66 The Best Living English Actors 29.3k VOTES You'd listen to Michael Caine talk all day, right? And surely you'd watch Ian McKellan in just about any movie Hollywood d...
Famous People Named Terence 6.5k VIEWS Have you ever realized how many famous people named Terence there are? We put together this list of celebrities named Terenc...
38 Celebrities Who Wrote Cookbooks 23.5k VIEWS Several famous actors, singers, and rappers have written their own cookbooks. Some celebs focus on specialty diets like vega...

Terence Stamp is also found on...