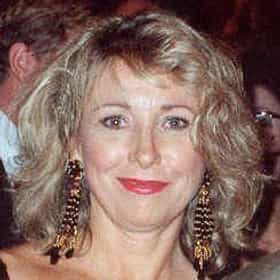 Teri Ann Garr (born December 11, 1944) is a retired American actress, singer, comedian, voice artist and dancer. She frequently appeared in comedic roles throughout her career, which spans four decades and includes over 140 credits in film and television. Her accolades include one Academy Award nomination, a BAFTA Award nomination, and one National Board of Review Award. Born in Lakewood, Ohio, Garr was raised in North Hollywood, California, the third child of a vaudevillian father and costume designer mother. In her youth, Garr trained extensively in ballet. She began her career as a teenager with small roles in television and film in the early 1960s, including appearances as a dancer ... more on Wikipedia

Teri Garr is ranked on...

#154 of 228 The Best Living American Actresses 169.4k VOTES It takes a lot to make a movie great. There has to be excellent writing, production, direction, editing, and of course, acti...
#269 of 362 The Funniest People of All Time 876.2k VOTES The funniest people of all time are a mix of actors, comedians, and even a few people who probably didn't start off trying t...
#60 of 1,042 Celebrity Death Pool 2020 72.3k VOTES They may be beloved performers, award winners, or game changers, but no matter how famous, you can’t escape death. This cele...
#401 of 514 Celebrities Nobody Cares About Anymore 3.4M VOTES Some of the greatest actors of all time have, in recent days, turned into a bunch of washed-up hacks that would be somehow b...
#583 of 2,003 The Greatest Actors & Actresses in Entertainment History 1.7M VOTES The best actors and actresses of all time, male and female, ranked by film fans worldwide. This list of greatest actors and ...
Every Person Who Has Hosted 'Saturday Night Live' 49.6k VIEWS Live from New York! It's Saturday Night! This is a list of all Saturday Night Live hosts, in reverse order,...
Celebrities Who Adopted Children 258.2k VIEWS Thinking of adopting? Let this list of celebrities who adopted children inspire you! Through the years many famous people ha...
20 Celebrities Who Worked at Disney Parks 137.9k VIEWS Disney theme parks offer aspiring actors, dancers, musicians, and comedians plenty of opportunities to hone their craft...
Celebrities Who Turned 75 in 2019 3.7k VIEWS UPDATED: Check out the celebrities turning 75 in 2020! Several famous people celebrated their 75th birthdays in 2019....
#21 of 153 The Best People Who Hosted SNL In The '80s 1k VOTES The 1980s started out rough for Saturday Night Live, but they rode the decade through and celebrated their 15th anniversary ...
32 Famous People with MS 36.8k VIEWS List of Famous People with MS, loosely ranked by fame and popularity. Multiple sclerosis or MS is an inflammatory disease th...
Actors in the Most Francis Ford Coppola Movies 1.9k VIEWS Francis Ford Coppola is one of the greatest film directors of all time. As such, he has worked with several talented actors,...

Teri Garr is also found on...