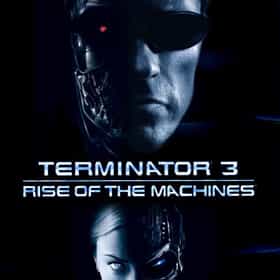 Terminator 3: Rise of the Machines

Terminator 3: Rise of the Machines is a 2003 American science fiction action film, directed by Jonathan Mostow and starring Arnold Schwarzenegger, Nick Stahl, Claire Danes, and Kristanna Loken. It is the third installment of the Terminator series, following Terminator 2: Judgment Day and the first to not involve franchise creator James Cameron, who directed and wrote the two first installments. The plot follows the events of the second installment. After Skynet fails to take out Sarah Connor before her son is born and to end John himself as a child, it sends back another Terminator, the T-X, in an attempt to wipe out as many Resistance officers as possible. ... more on Wikipedia

Terminator 3: Rise of the Machines is ranked on...

#293 of 599 The Greatest Epic Movies Ever Made 288.5k VOTES Need some movie ideas? Check out this list of the best epic films of all time, which encompasses some of the best movie...
#74 of 159 The Best Science Fiction Action Movies 95.3k VOTES In space, no one can hear you scream... but everyone else in the movie theater can. If you're searching for a gasp-worthy fl...
#121 of 233 The Worst Sequels Of All Time 78.2k VOTES The worst movie sequels from throughout film history. These are the follow-up films in a franchise or reboots that brought t...
#2 of 15 The Biggest Continuity Errors You Never Noticed In Huge Movies 10.3k VOTES When you watch a film, you're expected to suspend your sense of disbelief. However, the worst continuity errors in famo...
#44 of 149 The Best Movies of 2003 10.5k VOTES A list of the best movies of 2003, from dramas like Mystic River to critically acclaimed films like American Splendor. The '...
#22 of 52 The Most Exciting Movies About Female Assassins 778 VOTES What are the best female assassin movies? Now is your chance to weigh in. There is something about movies with women assassi...
#42 of 50 The Best R-Rated Movies That Blew Up At The Box Office 689 VOTES Here is a list of the highest-grossing rated R movies of all time. They built up their box office gains from worldwide distr...
#38 of 107 The Best Third Films In A Movie Series 28.2k VOTES Threequel: the third (and often final) movie in a series. A third film that follows the original and the sequel. With the ne...
#17 of 40 People who voted for Terminator 3: Rise of the Machines... People in the South are 2x more likely to vote for this The Greatest Arnold Schwarzenegger Movies 28.3k VOTES All of the greatest Arnold Schwarzenegger movies in one list, no movie too small or too big to be included. From the best Ar...
#5 of 15 Embarrassing Scenes That Were Wisely Cut From Sci-Fi Films 6.4k VOTES The worst deleted scenes in films are simultaneously the best because it shows that the filmmakers had enough awareness to r...
#53 of 117 The Best Time Travel Movies 49.1k VOTES If you're looking for the best time travel movies of all time, look no further. This list contains some great films about ti...
#58 of 104 The Best Robot & Android Movies 14.7k VOTES This list of the best robot movies includes a number of great films featuring robots, androids, gynoids, cyborgs and every o...
#48 of 65 The Best 2000s Action Movies 11k VOTES A list of 2000s action films shows a very interesting trend: the unlikely action hero. 00s action movies also include some o...
#61 of 89 The Best Sci Fi Thriller Movies, Ranked 8.9k VOTES This list contains information on the best sci-fi thriller movies, ranked from best to worst by user votes. The best sci-fi ...
#314 of 324 The Best Warner Bros. Entertainment Movies List 5.8k VOTES List of Warner Bros. Entertainment movies, ranked best to worst, including trailers, genres, and release dates. Warner Bros....
#50 of 78 The Best Car Chase Movies Ever, Ranked by Fans 7.5k VOTES You know what makes the best car chase movies kick ass? It's not just the excitement or the tension. It's the payoff of when...
#19 of 38 The Best Cyborg Movies 2.5k VOTES The greatest '80s cyborg movies like The Terminator are the most well-known, but there have been movies about cyborgs for a ...
#4 of 6 All 6 'Terminator' Movies, Ranked Best to Worst 614 VOTES These are the best Terminator movies the franchise has to offer. The T-800 and subsequent models have&nb...
#20 of 26 The Best Nuclear Holocaust Movies 600 VOTES A list of the best nuclear holocaust movies ever made, ranked by movie fans with film trailers when available. This nuclear ...
#7 of 13 Best Bathroom Fight Scenes in Movies 64 VOTES We compiled the best bathroom fight scenes in movies. From Hollywood action movies to foreign films, the greatest fight scen...
The Most Expensive Movies Ever Made 16.4k VIEWS A list of the most expensive movies ever made. These are the films that cost the most amounts of money to create. This list ...
Largest Movie Budgets, Adjusted for Inflation 9.5k VIEWS A list of the most expensive movies ever made, adjusted for inflation. These are the films that cost the most amounts of mon...

Terminator 3: Rise of the Machines is also found on...