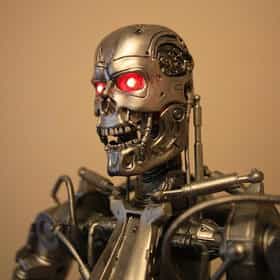 Terminator is ranked on...

#66 of 74 The Most Utterly Terrifying Figures in Horror Films 155.8k VOTES This is a list of the most chillingly terrifying figures in film, as ranked and voted on by horror fans. There are a lot of ...
#4 of 961 People who voted for Terminator... also upvote Star Wars Franchise on The Best Movies of All Time also upvote Dark Knight Franchise on The Best Superhero Movies Ever Made The Greatest Movie Villains of All Time 1.2M VOTES While some of us tend to despise movie villains, plenty of movie-goers favor some of these antagonists. Whether that's ...
#11 of 27 The Best Fictional Characters Who Sacrificed Themselves 2.9k VOTES They all paid the ultimate price. In that defining moment, each of these characters who sacrificed their lives and died for ...